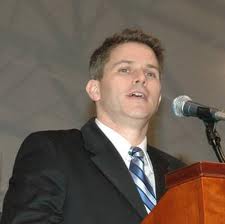 Mike Jacoby, CEcD is the Executive Director at the Zanesville-Muskingum County Port Authority in Ohio.  Muskingum County is the boyhood home of John Glenn, Jr. who graduated from Muskingum College before becoming a Marine Corps aviator, decorated war veteran, NASA astronaut and U.S. Senator.  The County is also home of The Wilds, one of the largest and most innovative wildlife conservation centers in the world.  For perspective, Muskingum County is located just east of Columbus, Ohio and has a population of roughly 86,000 people.  Geographically it lies in the Utica Shale play footprint.

Shale energy is currently the big topic in Ohio, Pennsylvania, West Virginia and New York.  As the shale energy industry grows, it can have a transformational impact on the communities it touches.  Zanesville, Ohio is a community of roughly 25,000 people. The Zanesville-Muskingum County Chamber of Commerce is holding a series of Utica Shale meetings to answer questions and share information about the Shale Play.  What drove the thinking to establish the meeting series, and what are some examples of questions that are being asked frequently?

The Zanesville-Muskingum County community was quick to embrace the opportunities presented by what could become a shale boom.  I think the reasons are two-fold.

First, the oil & gas industry is something we understand and have a long history with.  Over the last 50 years, more oil and gas wells have been drilled in Muskingum County than any other Ohio county.  The wells were not horizontal and were typically into sandstone formations, but most everyone here knows someone with connections to the traditional oil and gas industry.  We know the resource is there.  We know it powers our homes and cars.

We know it can be safely extracted to the benefit of our economy, which speaks to the second reason our community reacted quickly to the Utica opportunity. Put simply, this is an unprecedented economic opportunity.  In the last 10 years or so, our manufacturing employment base has taken tremendous blows. Our unemployment rate remains above 10%.   And while American manufacturing is regaining strength, job growth is still fairly meager.  The oil & gas industry could provide some economic recovery that we desperately want.   Needless to say when Halliburton announced it would build its operations hub to serve the Utica Shale in Zanesville, the bandwagon got REALLY FULL really quick.

What are some of the “sleep loss” impacts associated with the shale energy industry that you feel definitely need a well thought through plan to manage effectively?

I think the most obvious worries are the unknowns.  What will the wells in the county produce?  Will we experience the same boom as other areas?  If so, how long will it last?  Do we have the appropriately trained and experienced workers for the job opportunities?  What if we throw all our energy into training people for oil and gas jobs and then prices drop and the boom stalls?  Can we maintain the infrastructure?  And I could go on.  Based on so many unknowns, I think the word “plan” is a little misleading.  What we have right now across many aspects of the community is inquisitiveness.  We are asking questions, gathering information, sharing information, and perhaps most importantly a group of government, business, and civic leaders who are stepping out trying to foster communications, think proactively, and be in a better position to unify people around a plan once more variables are known.

The Ohio Department of Natural Resources released a report that concluded injection of gas-drilling wastewater into deep subterranean wells almost certainly caused a series of small earthquakes in Youngstown, Ohio.  At the same time, the ODNR announced a series of regulations for drillers.  What has the reaction of Ohioans in your area been to the earthquakes, and what has the industry’s reaction been to new regulations?  What challenges has this presented to you as an economic development leader?

My sense is that most informed people recognize that class II disposal wells have been around safely in Ohio for a long time.  But as I understand it, brine injected too deep and into a fault line can lubricate the friction between plates and result in tremors.  It is reassuring that the State took quick action to address the problem near Youngstown.  I have to give state officials credit for using their authority decisively.  The last thing we or the responsible industry players want to see happen is a bad geologic location or a bad actor ruin the potential for what has been historically a safe practice.   The challenge is the same as so many other issues: education and sharing facts.  That said, long-term I believe it may be in everyone’s interest to recycle the frac water.  One of the great things about the oil and gas industry is its ability to innovate and adopt best practices.

The shale energy industry is at an early stage of development in Ohio with optimism the Utica Shale Play can have a significant economic impact on the Region and State.  What are some of the positive impacts you have seen and/or anticipate?  What are some of the challenges community leaders need to proactively think through so they are prepared to ensure success?

A fantastic synergy has been Zane State College’s growing reputation as a center of excellence for all kinds of energy training because it fits perfectly the needs of the oil and gas industry and a work force hungry for marketable skills.  The shale boom has helped Zane State build its vision for an energy corridor and STEMM center.

But one of my favorite stories is the call I had from a company in Houston.  They wanted to know who were building apartments in our area because they might want to lease and furnish “hundreds” of new apartments for oil and gas workers. I don’t know what happened in Houston the last four years, but in 2008 construction came to a crashing halt around here.  We have developments that stopped in midstream, so I did not have such a list of apartment developers handy.  As we called possible developers, you could sense their excitement and optimism.   The prospect of actually planning for new construction and population growth is a powerful salve for the outlook of a typical businessperson.

Something that I think we need to remember is that this in not North Dakota. Eastern Ohio is a fairly populous, traditionally industrialized area that in many cases has gone through population loss.  No one needs to build man camps.  We have plenty of communities with business locations and housing options.  The oil and gas industry and its supply chain will have choices.  We have to work at being a preferred location.

How important do you feel forming a collaborative partnership between shale energy industry leaders and the leadership in a community is?  What would you expect the benefits to be?  Do you have any examples of where these kinds of collaborative approach to problem solving helped reach a mutually beneficial resolution?

Anadarko Petroleum has well sites in our county.  They were very proactive in reaching out to us early in the process to start productive communications.  They invited community leaders to see their operations near Williamsport, PA.  We met with their management team there and toured several well sites in different stages of construction.  That was really beneficial because we now have a better understanding of the industry, the process, etc.  We also realized how much emphasis they put on safety and their expectations for contractors.  Something Anadarko suggested was the creation of a shale task force, which we have formed.  The task force meets regularly and is an open forum for the public officials to get updates on shale activity from the companies but also a forum for public officials and to express concerns, raise issues, seek solutions to problems.  It allows for broader information sharing and addressing of issues and concerns before they grow into problems.

I know you are still “learning on the fly” as the shale energy industry investment in your community and Region grows.   But are there any lessons you can offer already that ED professionals in a similar situation to yours might consider for reapplication?

The oil and gas industry seems to favor speed over cost.  Having a shovel ready site or prepared building will work to your advantage if you can tolerate the investment and risk up front.  They don’t have much patience for lengthy or complicated processes or approvals.   They will pay more for certainty and a clear path forward.

Thinking long-term, what I have told people is that we need to remember the shale boom, even if it lasts 30 years, will end.  When it does, I hope we will have used the boom as an opportunity to build a diverse small business community and invest in higher education so that we can create our own economy of the future.