Until the publication of documents about the war in Afghanistan, I’d never paid attention to WikiLeaks (please note that the service to the U.S. hosted site is down – read more). But, with the recent publication of information about U.S. diplomatic correspondence, I decided it was about time to research WikiLeaks and better understand both the websites’ mission and methods.

Question – Is WikiLeaks actually good for Brand America or is it bad?

In prior posts, I’ve commented on the importance of communities behaving in a way that is consistent with their brand promise. Authentic behavior always speaks louder than unsupported rhetoric. In theory, anything that helps a community behave authentically can be viewed as a good thing.

Thomas Jefferson may have argued WikiLeaks is good for Brand America.

“Our liberty cannot be guarded but by the freedom of the press, nor that be limited without danger of losing it.” –Thomas Jefferson to John Jay, 1786.

“No government ought to be without censors, and where the press is free, no one ever will. If virtuous, it need not fear the fair operation of attack and defence. Nature has given to man no other means of sifting out the truth whether in religion, law or politics. I think it as honorable to the government neither to know nor notice its sycophants or censors, as it would be undignified and criminal to pamper the former and persecute the latter.” –Thomas Jefferson to George Washington, 1792.

“I am… for freedom of the press, and against all violations of the Constitution to silence by force and not by reason the complaints or criticisms, just or unjust, of our citizens against the conduct of their agents.” –Thomas Jefferson to Elbridge Gerry, 1799.

But, should WikiLinks be thought of in the same manner?  Recent articles suggest the question is not as straightforward as it was back in the 18th century.

“This disclosure is not just an attack on America’s foreign policy interests.  It is an attack on the international community — the alliances and partnerships, the conversations and negotiations, that safeguard global security and advance economic prosperity.” – Hillary Rodham Clinton

“Transparency is fundamental to our society, and it’s usually essential — but there are a few areas, including diplomacy, where it isn’t essential.” – Benjamin Netanyahu

“This is clearly not an act for the public good.  It is not justifiable in any way, shape for form.” – James Carafano

“If, as a nation, we want to engage in diplomacy or intelligence collection, we need the capacity to preserve secrecy. You cannot conduct diplomatic negotiations in public.” – Steven Aftergood

According to the respondents of a poll I ran on LinkedIn.  The poll had 102 responses.  The results should be viewed as directional, but caution should be exercised before projecting the results too broadly.

Overall Results – WikiLeaks is seen as a brand destroyer or as having a neutral impact. 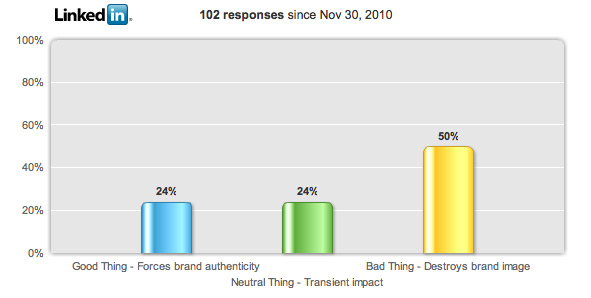 Age Results – Some older responders see the potential of WikiLeaks as a brand builder. 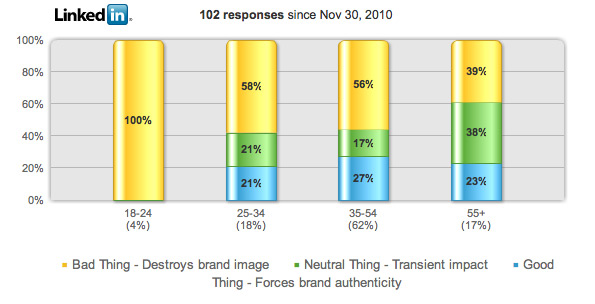 Job Title – The majority of Managers see WikiLeaks as either a bad thing or having a neutral impact. 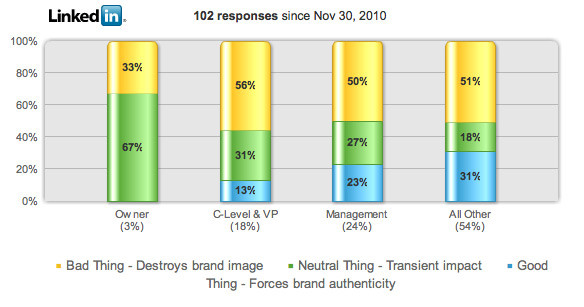 I think the impact of WikiLeaks on Brand America may actually be dependant on how the situation is ultimately managed. In some respects it is similar to the Tylenol tampering incident. Johnson & Johnson managed the situation in a way that protected the Tylenol brand and ultimately strengthened it through implementation of tamper evident packaging and passage of federal anti-tampering laws.  In fact, an article in the Washington Post reported, “Johnson & Johnson has effectively demonstrated how a major business ought to handle a disaster.” For perspective, at the time of the scare the market share of Tylenol was reported to have collapsed from 35% to 8%. But, it rebounded in less than a year after, a result credited to J&J’s prompt reaction that was authentic with their corporate credo. In November, it reintroduced capsules but in a new, triple-sealed package, coupled with heavy price promotions and within several years, Tylenol had become the most popular over-the-counter analgesic in the US.

If laws were broken in obtaining secret information, I certainly think the legal system should be fully leveraged and the perpetrators given the benefit of appropriate due process. As the saying goes – if you did the crime, you do the time.

But, I also worry that mismanagement of the most current crisis created by WikiLinks may do more harm to Brand America’s global image than ultimate good.  The potential for damage is clearly present.

Part of the Brand America promise is our unflagging defense of the Constitution of the United States of America.  The First Amendment to the United States Constitution prohibits the making of any law “respecting an establishment of religion“, impeding the free exercise of religion, infringing on the freedom of speech, infringing on the freedom of the press, interfering with the right to peaceably assemble or prohibiting the petitioning for a governmental redress of grievances.

How does the country that staunchly supports freedom of the press successfully manage through this situation in a way that clearly demonstrates consistency with that belief?

I am not posing the question from a legal vantage point, but rather from a brand image perspective.  For example, will N.Y Congressman Peter King’s approach of classifying WikiLeaks as a terrorist organization, and separately to criminally charge Julian Assange under the Espionage Act be viewed as authentic with the Brand America promise?  Or, should we respond more in line with U.S. Defense of Secretary Robert Gates belief that the impact will be fairly modest. My guess is this situation is likely to get uglier before it gets better.  But, regardless of how it is ultimately resolved, WikiLeaks has delivered an excellent case study to illustrate the connection between diplomacy and place branding.

What is your opinion?

Please leave a comment and share your perspective.  By sharing, you help everybody get a better learning experience.

Your support in helping build awareness of this educational endeavor matters and is appreciated.