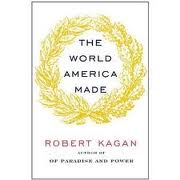 Robert Kagan of the Brookings Institute has authored a new book entitled “Why The World Needs America”.  Robert is an expert on Egypt, the Middle East, U.S. national security and U.S.- E.U. relations. He is a senior fellow in foreign policy at the Brookings Institute. I read an article he recently authored for the Wall street Journal that highlights the main premise of his new book.

His logic is straight forward and, in my opinion, and not without merit. Here are some quotes from the WSJ article that outline Robert’s argument.

“Would the end of the present American-dominated order have less dire consequences? A surprising number of American intellectuals, politicians and policy makers greet the prospect with equanimity.”

“For several decades, the balance of power in the world has favored democratic governments. In a genuinely post-American world, the balance would shift toward the great power autocracies.”

“People assume that China and other rising powers that have benefited so much from the present system would have a stake in preserving it.”

“The creation and survival of a liberal economic order has depended, historically, on great powers that are both willing and able to support open trade and free markets, often with navel power. If a declining America is unable to maintain its long-standing hegemony on the high-seas, would other nations take on the high seas, would other nations take on the burdens and expense of sustaining navies to fill in the gaps?”

“The Chinese economy soon may become the largest in the world, but it will be far from the richest. Its size is a product of the country’s enormous population, but in per capita terms, China remains relatively poor.”

“China’s per capita GDP by 2030 would still only be half that of the U.S. putting it roughly where Slovenia and Greece are today.”

“China’s leaders. Presiding over a poorer and still developing country may prove less willing to open their economy.”

“China’s form of capitalism is heavily dominated by the state, with the ultimate goal of preserving the rule of the Communist Party.”

“The government amasses wealth in order to secure its continued rule and to pay for its armies and navies to compete with other great powers.”

“Americans certainly like to believe that our preferred order survives because it is right and just – not only for us but for everyone.”

“International order is not an evolution; it is an imposition. It is the domination of one vision over others – in America’s case, the domination of free-market and democratic principles, together with an international system that supports them. The present order will last only as long as those who favor it retain the will and capacity to defend it.”

“If and when American power declines, the institutions and norms that American power has supported will decline too. Or more likely, if history is a guide, they may collapse altogether as we make the transition to another kind of world order, or to disorder.”

I believe that we need to begin strengthening the global competitiveness of Brand America now, before our nation is in a crisis that may not be recoverable. We have challenges on authenticity of the Brand America promise for many of Americans. If the promise is unattainable for the majority of Americans then the core premise for the American Dream is at risk. We also have challenges in competing successfully in a new interdependent world that need to be addressed. My work with the Nemacolin Energy Institute has increased my personal sensitivity to the importance of having a national energy policy and moving our nation toward energy independence. A crisis in access to energy sources would certainly be big enough to potentially threaten the current world order. And, based on what I have read, it is a crisis we can avoid with a reasonable amount of proactive statesmanship.

I’d like to suggest that the economic development profession could play a key role in Strengthening Brand America by strengthening the competitiveness of local communities for capital investment. The better choices we make locally around asset creation, infrastructure investment and public policy reform, in aggregate our nation becomes stronger. I am hopeful that the Strengthening Brand America Project can, in a small way, provide actionable insights that enable those better local choices to be made.

What Are Your Thoughts?

What do you see as the things that we need to address in order to improve the authenticity of Brand America’s promise? Do you think the scenario Robert Kaplan describes is plausible? What can, or should, our Nation do better?

2 Responses to “Brand America is Fragile”