Does The Emperor Have Clothes?

I have written a number of blog posts on the subject of social media. The general message in all of my writing has been to consider the channel as experimental and invest in it with a “seek to understand what works” mentality. I know many people will push back on my counsel, and have pushed back publicly. But, typically these people fall into one of two categories – 1) they are consultants seeking to make money by advising clients on how to structure their social media efforts, or 2) they are people working for a company and investing somebody else’s money rather than their own.

This week I had a conversation with friend who recently led a training session on the use of social media in place branding, and I asked him if he had any specific examples of where social media delivered a confirmed ROI. He had one potential example and that was the role Twitter may have played in convincing Fernando Aguirre to relocate Chiquita’s HQ from Cincinnati to Charlotte.

If you are not familiar with it, in an attempt to convince Fernando to stay in Cincinnati a Twitter campaign called “No Cincy Banana Split” was started. Fernando is an active tweeter and complimented the creativity of the approach. Charlotte responded with a campaign of their own asking residents to tell Fernando why they love Chiquita bananas. The “Queen City War” (both Cincinnati and Charlotte claim the designation Queen City) was picked up by the press and given some airtime. The Washington Post ran an article titled “Chiquita’s new world headquarters in Charlotte decided with help from a Twitter war”.

With all due respect to the Washington Post, my take is the Twitter campaign had minimal effect, if any, on the decision to move Chiquita’s HQ. It is the kind of “pop news” the press glamorizes to appease readers. In my opinion, it is also the kind of situation that has the potential to turn into an urban legend. Frankly, I will not be shocked to see social media consultant presentations with a Chiquita case study slide as definitive proof of the power of social media in place branding. But, other than being seen as an opportunity to endear Chiquita to the residents of Charlotte and maybe as a way to increase consumer sales in the MSA, my guess is the Twitter war had little to no impact on Chiquita’s actual business decision.  In fact, in an interview with Cincinnati’s Business Enquirer, Fernando didn’t cite it as a reason at all even though he was asked specifically about his interest in Twitter.

My friend also said something profoundly more interesting.  He confessed that he wonders if social media may turn out to be a case where “the Emperor has no clothes” and nobody is willing to admit it. I think his concern may in fact be valid if the wrong expectations are set for the media. And that is my greatest fear.  I have no doubt, like every other channel, social media will be a good business choice for some situations and a bad business choice for most. The key, in my mind, is to experiment and learn so you can discern when it is right to leverage and when it is not.  We need to learn our way to success and avoid blindly investing in a media because we think we may be missing out on something if we don’t.

In an attempt to help foster a sense of purposeful experimentation, I have summarized a few of the more interesting recent reports I have read recently about social media effectiveness.

How to calculate the ROI of social media authored by Dr. Natalie Petouhoff.

The details of her approach may not be appropriate for your specific circumstance, but the logic definitely is and, in my humble opinion, well worth your time to review.

I have been working on developing a visualization to connect place branding tactics to the marketing funnel as a way to illustrate how to think about delivering an ROI. It is not “ready for prime time”. But, I would love to get your reaction, thoughts, and/or suggestions for improvement. 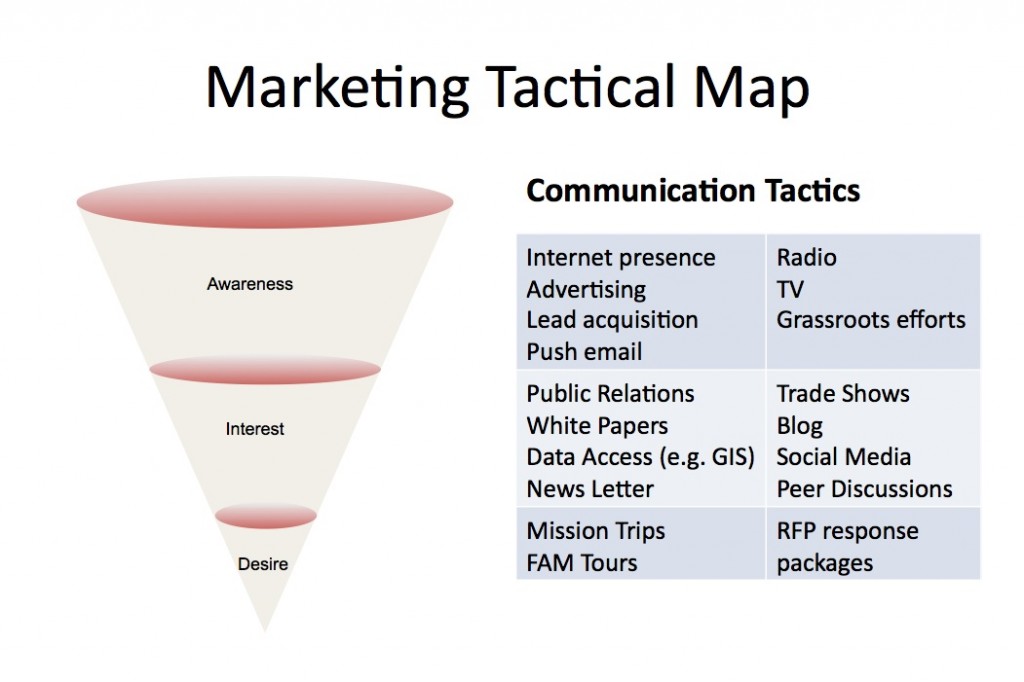 I think tying tactics, including social media, to the marketing funnel will encourage a cause and effect discussion that at least will underpin investment with a reasonable strategic logic. If you can’t articulate why an investment should be expected to deliver an ROI, then it probably won’t.

What Are Your Suggested Improvements?

What is missing in the visual? What measures would you suggest be looked at for each tactic? Are the tactics in the right “bucket”? Are you aware of other visuals like this one that may be helpful in illustrating the point I am trying to make? Do you have case studies that may be instructional that you can share?

4 Responses to “Does The Emperor Have Clothes?”