My first exposure to China was upon arrival at the Beijing Capital International Airport. It is the second busiest airport in the world in terms of passenger throughput (2011 ranking), just behind the Atlanta Airport. It was expanded in 2008 to accommodate traffic for the Olympics. The airport is about 20 miles outside of the city and is architecturally stunning. I don’t know what I was expecting, but I wasn’t expecting to find a world-class transportation infrastructure based on everything I had read beforehand describing China as a developing country. It wasn’t until I stopped in the men’s room at baggage claim and encountered my first “squatty potty” that the dichotomy of China struck me.

A Country of Contrast

My overarching impression of China is of a country of stark contrast. It is an interesting juxtaposition of old and new. And nowhere was it more evident than in Beijing, the capital of China.

Here are a few historical facts that impressed me.

The feeling of history in Beijing is palpable, and a source of great pride for the people who live in the city. It is a constant backdrop to the raid modernization the city has been undergoing. For example, the Forbidden City (nearly 500 years old) is fronted by a modern Tiananmen Square (enlarged by Mao Zedong in 1958) complete with Jumbotron video displays. And when you tour the city you see unbelievably tall government housing skyscrapers standing in stark visual contrast to the historical hutong district where people live in neighborhoods of courtyard residences (siheyuan) that share communal bathrooms.

Based on my experience in Beijing, it is clear China is a country that has been rapidly modernizing its infrastructure and is working to ensure its people are not left behind in the process. The government is systematically relocating Hutong neighborhood residents into public housing to improve their standard of living and provide greater opportunity for economic advancement. This is a major urban development project I believe would be fascinating for every economic development professional to explore. It is a great example of how China is actively reinventing its cities, and struggling to walk a fine line between modernization and cultural preservation.

Beijing is the second largest industrial center in China. Some of the main industries include – steel, motor vehicles, machinery, petrochemicals, processed food, and electronics (not a comprehensive list). Beijing is a major center of transportation and trade. International products and brands are commonplace. Bicycles have quickly given way to automobiles (although you can still see some amazing sights as individual’s still transport some unbelievable things by bicycle on busy city streets) and scooters.

Beijing’s GDP reached 1.6 trillion yuan in 2011 according to the Beijing Municipal Bureau of Statistics. That translates to a per capita GDP of roughly $12,500 U.S. dollars. The average annual income in Beijing’s was 56,061 yuan in 2011 (roughly $8,700 U.S. dollars). I did an online comparison between the cost of living in Beijing and my city of Cincinnati. It was estimated to be 13% less expensive to live in Beijing. But, the annual income for people living in Cincinnati is roughly $45,100 (5X Beijing). That difference has meaningful implications on disposable income available. Yet, everywhere I looked YPs in Beijing were dressed fashionably and were sporting MP3 headphone buds in their ears while talking on cellular phones. Consumerism appeared to be alive and well.

I was in Beijing for 4-days. At the end of my stay, I found myself missing seeing the sun and blue sky. Air quality is a growing issue in Beijing, and China in general. It is an issue that the government is attempting to address. According to a report issued by the Beijing Municipal Environmental Protection Bureau in 2011, sulfur dioxide concentration was down by -36% in 2010 versus 2005. China has initiated a program to significantly reduce carbon dioxide emissions by 2015. This is an initiative that can deliver worldwide benefit if achieved. One of the cornerstone programs in Beijing is the conversion of public transportation to liquefied natural gas. Beijing has adopted a “Green Beijing” action plan to improve air quality. It may be the kind of plan elected officials and economic development professionals in the U.S. would find as an interesting benchmark for their local efforts.

China is estimated to have the world’s largest shale reserves. Perhaps shale energy will play a key role in China’s success. Time will certainly tell. One thing is for certain; China’s shale energy will be an emerging industry of interest for global investors.

Here are a few pictures taken ay Tiananmen Square and the Forbidden City to provide you a visual perspective. 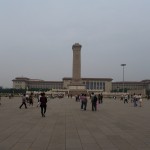 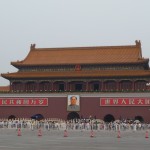 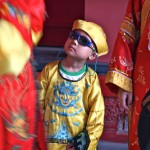 My next stop is Shanghai.  If you have been to China or have an understanding of the culture, people and/or economy, please comment on this post.  The more we share the better we will understand Brand China.  You might also want to read my first blog post in this series – Impressions of China.

4 Responses to “Impressions of Beijing”