Unionization Trends in the U.S.

What role does union activity actually play in the site selection decision?

Area Development published an article in the November 2012 issue entitled “Right-to-Work/Low-Union-Profile States: Making or Breaking a Deal” that suggested the following:

“Low-Union and RTW status are important site selection factors for manufacturing companies in particular because the labor-management climate varies substantially from location to location across the United States.”

Research conducted by Area Development ranks low-Union profile (#10) and locating in a RTW state (#12) in importance to the site selection decision from a list of 26 factors they studied.

But, does unionization actually have a significant impact on the cost of doing business? Or, is the concern about the negative impact of unionization primarily an emotional one?

What role should it play?

The John Glenn School of Public Affairs authored a paper in February 2011 that sheds some light on the question. The paper is entitled “Unionization Trends in Ohio and the U.S.”.

You can download a copy of the paper by clicking on the cover below. 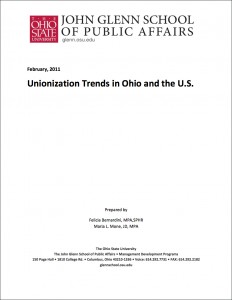 The paper has a number of very interesting findings and the data should be useful for an economic developer interested in better understanding the topic of unionization in the U.S. Below are a couple of excerpts I found particularly interesting.

Of course, as with any academic paper, there are a number of tables and rankings comparing the 50 states. One of the more interesting is Table 11 that shares data on the representation and union wins by state. Essentially, the table looks at the frequency an election occurred to unionize and the number of times it was successfully passed.

I find the data interesting because it suggests the risk of new union formation in Texas (an RTW state) is actually higher than Michigan. In Texas, Unions won 72.09% of the time unionization came up for election. In Michigan, the Union win rate was only 64.52%. Based on these data, it would appear the risk of unionization is actually higher if a CEO chooses to locate in Texas than in Michigan. I would think these data offer an important perspective for CEOs looking at their short list of location options to consider.

I hope you find the paper an interesting read.  Undoubtedly the topic of unions and right to work legislation will continue to be a focus of interest for the press.  You can expect passionate debates on both sides of the issue.  I think it is important we recognize that our job as economic development professionals, is to try and be as knowledgeable a possible about the data rather than be overly swayed by the rhetoric on this subject.

2 Responses to “Unionization Trends in the U.S.”