“California May Be Dreaming, But Texas is Working”* 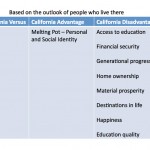 Destination in life is the sentiment that one has about their ability to choose their destinations (i.e. job, housing, travel, etc.)

Melting pot – Personal and Social Identity is the sentiment one has about different personal and social identities (e.g. sexual orientation and religious practice)

“While California has more bureaucrats, Texas has 17 percent more teachers, with 295 education employees per 10,000 people, compared to California’s 252.

The two states’ educational outcomes reflect this disparity. If we compare national test scores in math, science, and reading for the fourth and eighth grades among four basic ethnic and racial categories — all students, whites, Hispanics, and African-Americans — Texas beats California in every category, and by a substantial margin. In fact, Texas schools perform consistently above the national average across categories of age, race, and subject matter, while California schools perform well below the national average.”  http://www.nationalreview.com/articles/293412/texas-vs-california-chuck-devore

“Californians make more money, but they need to spend more on basic necessities such as food and housing.”

“California’s model of government-led prosperity, aided by the nation’s best weather, appears to be in serious jeopardy. Texas’s model of freeing jobs creators to do what they do best through low taxes, less regulation, and a better lawsuit climate is looking stronger by the month.”  http://www.nationalreview.com/articles/295422/texas-vs-california-revisited-chuck-devore

Home ownership rates in Texas are 63.6% versus California at 55.6%.  http://scorecard.assetsandopportunity.org/2012/measure/homeownership-rate

In contrast to these results, the 2012 Gallup-Healthways Well-Being Index rates California slightly ahead of Texas on their happiness measure.  http://www.gallup.com/poll/125066/State-States.aspx

ALEC-Laffer State Economic Outlook Ranking – 2012 rates Texas #16 and California #38.  This ranking evaluates policy variables that are directly influenced by state lawmakers through the legislative process.  The executive Summary concludes – “California is not living up to its reputation as the country’s economic leader.”  “If California wants to get back on the path to prosperity, then it needs to look to Texas.”

So, which states offer their residents the greatest chance of achieving the American Dream, and which states are lagging behind?