“Florida – The Perfect Climate For Business.” 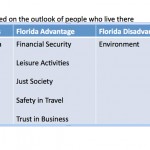 Florida is rated more tax-friendly for retirees than North Carolina

Florida is less expensive than North Carolina for home buyers

The unemployment rate is lower in Florida than North Carolina

Florida’s unemployment rate is 8.0% versus 9.2% in North Carolina.

North Carolina has a poverty rate by household income of 13.1%, Florida has a rate of 11.1%

Lifestyles and environments vary greatly across the state—from the Research Triangle to the beaches of the Outer Banks—but overall, North Carolina is not a particularly active place. In a survey by the Centers for Disease Control & Prevention (CDC), more than one-fourth of respondents in North Carolina had not exercised in the past month, and the state ranks 10th nationwide for obesity.  While there are certainly leisure activities available in North Carolina, it doesn’t appear people living there take advantage of them.

Florida is ranked #2 in tourism dollars.

With its expansive coastline and favorable winter weather, it’s not surprising that Florida comes in second on the list of states earning the most tourism dollars, grossing $70.5 billion. Disneyworld and its surrounding theme parks, Key West and Miami are just some of the many tourist attractions luring visitors from around the world.  Given the wide variety of options, it isn’t hard to see why Florida would have an edge in leisure activities.