“New Jersey. A State of Resilience.”

“New York – The Center of The Global Economy” 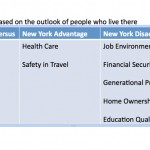 New Jersey’s public schools are the best in the nation

A leading annual publication ranks New Jersey first in the country based on 19 factors that measure the quality of its public schools.

New Jersey students score higher than ever on AP exams

Not only is New Jersey first in the nation in the average Advanced Placement (AP) score for public school students for the third year in a row, this year’s score is the highest any state has ever scored.

High school graduation rate is #1 in the nation

New Jersey ranks first in the nation in the percentage of students graduating high school.