Alabama: A Better Place To Build A Better World 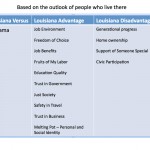 To that end, I did a Google search to find some clues to shed light on the why.  This is not intended to be a complete, nor balanced comparison between the two states.  It is simply intended to suggest there may be an underlying reason why people living in each state responded as they did.  The next step should be for local economic development professionals to conduct market research with people living in their state in order to better understand the true drivers of why they are feeling the way they do.  The research could be qualitative, quantitative or a combination of both.

Louisiana (#35) is ranked better than Alabama (#40) based on cost-benefit.

Louisiana (#15) is ranked higher than Alabama (#30) on education quality.

Louisiana (#25) ranked higher than Alabama (#47) in businesses and jobs.

Freedom of choice is the ability to choose what he/she wants in life.

Melting pot – Personal and Social Identity is the sentiment one has about different personal and social identities (e.g. sexual orientation and religious practice)