The Call For Tactical Transparency

I have been reading a lot in the economic development news regarding the public demand for increased transparency on the use of incentive packages as a tactic to encourage capital investment in a community. It is a relatively controversial subject.

Economic development professionals insist that CEOs expect incentive packages as part of any capital investment deal. The big fear is that lack of a competitive incentive package will eliminate a community from any further consideration as a location for business development.

Elected officials are getting increasingly concerned that economic development professionals are too eager to give away money to companies. They are beginning to more aggressively question the rigor used in evaluating whether an incentive package is actually needed for (or deserved by) the CEO to seriously consider their community as a location for business expansion. They are also clearly worried any blowback from a “bad deal” scandal may impede their efforts to be reelected.

The media is investigating the process looking for evidence of corruption and misuse of public funds. This, of course, has made everybody involved in the process nervous. Probably the most well read were the series by Louise Story a business reporter for the New York Times.

Taxpayers are confused by discussion of the subject. They don’t know whom to mistrust, so they mistrust everybody involved in the site selection process. Their primary objective is to make certain there is a positive return on their tax dollars.

CEOs are concerned their company brand will be dragged through the mud for an amount of money that is more likely than not a rounding error on the P&L statement. But, they feel a fiduciary responsibility to request and accept any incentive package a community is willing to offer.

The prevailing rule of thumb for economic development professionals to decide if an incentive package should be offered is the “If not for” assessment. “If not for” this incentive, would the Company walk away? Then an assessment is made to determine if the promised number of jobs associated with the project will pay the incentive dollars back over a specified period of time (typically 5 years).

Of course, the problem with this approach is that the default is to believe the Company will walk (particularly if another community has put forward a large incentive package). And, generally there is no attempt to quantify any opportunity cost associated with committing the incentive dollars.

It is true some communities actually have a more sophisticated approach to modeling the financial return of site selection deals. Assuming it is well designed, then the odds of a positive return on taxpayer dollars are certainly higher. 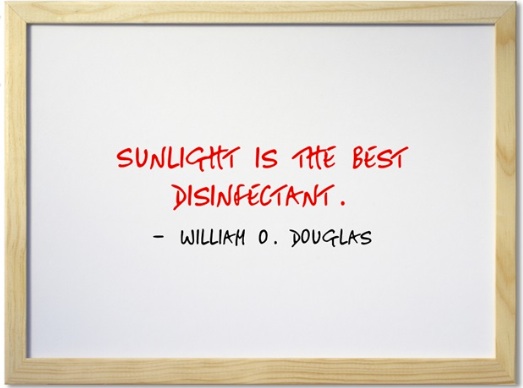 Shel Holtz and John Havens authored a book entitled Tactical Transparency. It was published in 2008. Their definition of the term is as follows –

“The degree to which an organization shares the following with its stakeholder publics: its leaders; its employees; its values; its culture; the results of its business practices; and its business strategy.”

I think it is a reasonable definition to use in economic development as well. Tactical transparency is all about creating and sustaining trust. It’s about doing the right thing. It’s about being courageous and principle based. It’s also not easy.

The big push back I hear about tactical transparency in economic development is concern that public disclosure of deal terms during, and sometimes even after, negotiation makes it difficult-to-impossible for a company and community to reach a win:win outcome. Negotiations are fluid and when done in a fishbowl risk public disclosure of competitively sensitive information for both parties. Candidly, having negotiated licensing and acquisition deals in the private sector, I genuinely empathize with this perspective.

But, I don’t view the concern as a roadblock to tactical transparency. In my mind, the key is to achieve transparency of the principles and process, and then to hold parties accountable for the agreed-to outcomes.

You can create trust if people understand and are confident the process your community follows to negotiate with companies is principle-based, rigorous, creates a win:win for all parties and is in control. There is nothing inherently wrong with the use of incentives as long as they contribute to furthering the greater good and have a reasonable chance of delivering a competitive return on taxpayer dollars.

Proper oversight and reasonable performance metrics can be put in place to provide assurance that incentives are not being abused. It simply requires a common sense approach. The Federal Government Accountability and Transparency Board model may provide some precedent guidance in this area. Nobody believes all information should be accessible by everybody any time they complete a Freedom of Information request. After all, would you want your neighbor to be able to have free access to your social security number?Learn how to report a lost social security card to safeguard your identity and finances from various frauds and making the filing of new card much quicker. It is a matter of common sense. I feel confident a set of rules can be created that define what information will be kept confidential so companies need not worry about public disclosure of sensitive data. Similarly, practices like creating code names so a company’s identity is not disclosed prematurely can be established.

A clear understanding of the deal process takes the gamesmanship out of it (or at least dramatically reduces the need for it). More time can be dedicated to determine if a community under consideration is truly a good fit for the company, and visa versa.

Taxpayers will have increased confidence that their money is being invested wisely and will help them better achieve the American Dream. Periodic reporting of consolidated performance metrics will ensure that confidence is sustained.

Elected officials and the media will be able to fulfill their responsibility for appropriate public spending oversight. Debates will shift from whether a particular company should have been offered an incentive package to a discussion of the principles governing the use of incentives. I believe the latter is a much more meaningful and productive conversation.

I find most people involved in economic development have a pretty strong opinion about the use of incentives. There are published studies that challenge whether the current approach to using incentives is actually delivering a measurable economic benefit. I don’t see the debate going away soon.

What I hope for is an open mind on the concept of tactical transparency as it relates to the process site selection deal negotiation. I believe there is room for improvement and that doing so will help restore public confidence the economic development profession is working hard to help them better achieve the American Dream.

What are your thoughts? Is there sufficient transparency in the process? Do you think the push back regarding confidentiality is something that can be adequately addressed? Is tactical transparency a concept we should be pursuing? Please comment.

3 Responses to “The Call For Tactical Transparency”