Can Detroit Turn The Corner?

I debated about commenting on Detroit’s recent decision to pursue bankruptcy as a strategy for stimulating the start of an economic turnaround.  According to news coverage, the decision has the potential to impact the financial stability of other cities by raising speculation among bond investors that it may only be a matter of time before other cities follow suit.

I decided to share my thoughts after reading articles with headlines like “Detroiters Not Giving Up; Neither Should We”.  I am disappointed the focus is on the unbending spirit of Detroiters rather than on the real challenges Detroit faces in its journey to create a better future.  Here is a quote that illustrates the point – “More than anything, I came to admire Detroiters because despite how hard it could be to live in the city, they stayed. And they stubbornly, tirelessly tried to find ways to make their city better.”

The issue isn’t the resilience of Detroiters.  Resilience is a good trait to have in a population, but it isn’t sufficient to chart an economically viable path for a city that will be doomed to fail if it doesn’t create fundamental change.

The problem Detroit has is a reluctance to let go of the past.  I believe the resilience of Detroiters with a “suck it up and this too shall pass” perspective that is positioned as a strength is actually and will continue to be a root cause of the city’s economic failure.

As an interesting side note, I participated in a panel discussion a few years ago at an economic development conference in Michigan.  At that time, a fellow panelist and economic development professional in Detroit presented his case that Detroit was poised for a remarkable renaissance.  In response to a direct question on what I thought about Detroit’s chances, my comment was leadership first needed to let go of the past before it could chart a better future.  With all due respect to my fellow panelist, I prognosticated Detroit’s efforts would likely not be successful until that break with the past actually occurred.  And now, Detroit is well versed on how to file for chapter 13 bankruptcy . And also not only about filing different kinds of bankruptcy cases, Detroit is also now learning about trying to avoid getting back into debt. See what things have become .

So, why did my perspective vary so greatly with my colleague from Detroit?  It is because he lacked the benefit of dispassionate distance to assess the situation.  I looked at Detroit through the lens of the “Transitions Model”, and he was living the transition.

The Transitions Model is used by CEOs in the private sector to help them better plan for leading their organizations through major changes (e.g. assimilating a company acquisition).  The model describes transitions as three psychological stages – Endings, Neutral Zone and New Beginnings. 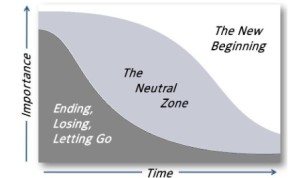 The Transitions Model is based on the five stages of grief.  It recognizes that before people can embrace the future, they must first let go of the past.  In the Endings stage, there is denial, anxiety, shock, and resignation.  People remember the “good old days” and long for the past.  Until they are willing to let go, the past acts like an anchor on growth.

The Neutral Zone is characterized by undirected energy. This is a stage where people feel anger, fear, confusion, frustration and conflict.  There is tremendous resistance to let go.  But as more and more people do elect to let go, there is a lot of exploration. Everybody has “the plan” and many initiatives get started and stopped.  When that corner is turned, people feel high stress, creativity, realization and acceptance that they must lose something to move forward, and finally a high degree of impatience to “get on with it”.

New Beginnings is the third and final stage.  People are ready to commit and embrace the possibilities of what might be.  It is a time when people feel hopeful, they are relived there is finally a plan to improve things, they willingly give their trust and they begin to get enthusiastic about the future.

The problem is that without visionary and strong leadership people struggle to move through the transition.  In my opinion, therein lies the opportunity for Detroit.  Economic Development professionals need to ensure that elected officials and private sector CEOs in Detroit provide the required leadership to create a compelling strategic plan that residents can understand and enthusiastically embrace.  And, proactively provide/create the enabling processes that allow the majority of Detroiters to successfully let go of the past, find their way through the neutral zone and embrace the vision of a new, stronger economy.

If asked (and to be clear I wasn’t), my counsel would be to harness the expertise of Human Resource Managers in Detroit companies to create a real plan to purposefully help Detroiters through the transition.  Without executing such a plan, Detroiters will continue to wander in the neutral zone or worse will never create a personal ending that enables them to move toward a new beginning.

I am curious what your thoughts might be.  Do you feel the Transitions Model applies?  Do you think residents are ready to let go of the memory of Detroit as the Motor City?  Do you feel like there is a plan in place to help Detroiters make the journey successfully? What do you think the next few years will look like for Detroit and its residents?

8 Responses to “Can Detroit Turn The Corner?”