Which State Is Judged By Its Residents As The #1 State To Achieve Their American Dream?

That is the question answered by the 2013 American Dream State Ranking Report.  The Report ranks the states based on data from the Xavier University’s American Dream Composite Index™ powered by dunnhumby research.

In 2012, the data ranked Montana as the #1 state to realize your American Dream.

Montana Is No Longer #1, There Is a New Top State

In 2013, New Mexico has earned the distinction of being the top state to realize your American Dream.

“The American Dream Composite Index™ (ADCI) powered by dunnhumby is a unique and robust measure of American sentiment that values the American Dream on a monthly basis.  The notion of the American Dream encompasses our behaviors, attitudes and satisfaction with economic conditions, personal well-being, societal and political institutions, cultural diversity, and the physical environment.  The ADCI reveals what people living in the United States do, strive for, work for, wish for, and ultimately, hope for as they assume multiple roles.”

The ADCI was not created overnight.  As the website describes – “The instrument is the culmination of over three years of research on the American Dream and remains the only statistically validated measure of the American Dream.”

And, the research has been rigorously validated to ensure data confidence.  “Three representative, independent samples of over 1,500 respondents each from across the U.S. were used to ultimately validate the ADCI.  Confirmatory factor analysis was utilized to verify that each item was satisfactorily reliable and that each dimension was internally sound and related to other dimensions in appropriate and predicable ways.  In addition, the 35 remaining dimensions were tested to see if they could be grouped or categorized into overarching and predictable themes or “super dimensions”.  Each dimension was assigned to only one overarching “super dimension”.  This produced the five “super dimensions” which we refer to as “sub-indices.”  In the end, findings based on the three independent samples indicated a statistically sound, valid, and reliable survey instrument.”

What Do The Data Describe?

… the “index number [ADCI] is a gauge of the level of how well people living in the U.S. are doing at achieving the American Dream”.  It is important to note the data help describe HOW residents feel about their ability to achieve the American Dream, but do not provide insight into WHY residents feel as they do.  As a consequence, specific secondary research at the local level is required to understand the drivers of current resident sentiment.

Why Is The ADCI Important?

It provides a performance metric that can be used by economic development professionals and elected officials to determine how well residents of their state feel they are achieving their American Dream.  Sub-index and dimension data can be compared year-over-year and versus other states to determine opportunities for better enabling residents to achieve their American Dream.

The ADCI puts the focus on “residents as boss” and makes both economic development professionals and elected officials more directly accountable to the residents of their community.

In addition, findings of a market research study among business executives suggest higher ADCI scoring locations will have a competitive advantage when a final site selection decision is made.

Where Does Your State Rank? 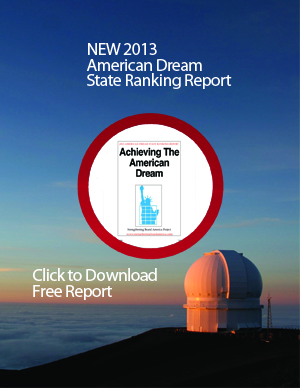 Note:  The goal of the rankings is to educate readers about the American Dream and stimulate a conversation around how residents can be better enabled to achieve more of their American Dream.  For purposes of State Rankings, the ADCI data is considered secondary data.  The ADCI research hypothesis is to value the American Dream as a nation (all 50 states and DC together).  Respondents self-identify their states (this is verified with PII data) every month, but this information is only used as a balancing item for state population strata based on the most recent census.  The State Ranking is non-scientific and done as an illustrative piece by the Burghard Group for the purpose of educating leaders on the quality of life around the country.  It is impossible to accurately measure the error rate given that neither a uniform nor standard rate is gathered from each state every month.  Data is compiled for the year for each state and then evaluated.  Readers of the Report are encouraged to check their state’s ADCI scores against relative Region scores and the national scores for a well balanced perspective on overall performance.