Op Ed – The American Dream: Who is Accountable?

“The American Dream is that dream of a land in which life should be better and richer and fuller for everyone, with opportunity for each according to ability or achievement. It is a difficult dream for the European upper classes to interpret adequately, and too many of us ourselves have grown weary and mistrustful of it. It is not a dream of motor cars and high wages merely, but a dream of social order in which each man and each woman shall be able to attain to the fullest stature of which they are innately capable, and be recognized by others for what they are, regardless of the fortuitous circumstances of birth or position.”

Recently, a few friends have sent me emails that have shared perspective that made me think even more deeply about Brand America’s promise (the American Dream).  All three have political overtones, so I will only share links to them in case you have a desire to validate the reference.

The first was a hoax that is making its rounds on the internet entitled “Like It, Or Leave It”.  This email incorrectly attributes a speech about Australia to a former prime minister.  The primary message is that immigrants must adapt to Brand Australia’s culture rather than the culture change to embrace immigrants.  According to Snopes.com, the speech is actually an Austrailianized version of an opinion piece authored by an American who was actually referring to the United States.

The second shared an opinion piece authored by Bob Lonsberry entitled “Two Americas”.  In his (highly partisan) piece, Bob raises the question of whether the government or the individual is responsible for ensuring creation of personal wealth.  He makes the point choices have consequences and Americans are free to make individual choices that impact the course their lives will take.

The third was a 1907 speech made by President Roosevelt in which he advocates “We should insist that if the immigrant who come here in good faith becomes an American and assimilates himself to us … There can be no divided allegiance here.  Any man who says he is an American, but something else also, isn’t an American at all.”

According to the University, and I agree, a reasonable articulation of the American Dream is James Truslow Adam’s definition – “the dream of a land in which life should be better and richer and fuller for every man, with opportunity for each according to his ability or achievement.”  I reframe the concept in the context of place branding and characterize the American Dream as Brand America’s Promise, and advocate that elected officials at all government levels should adopt the strategic aspiration of “better enabling residents to achieve their American Dream” to guide tactical choices on asset creation, infrastructure investment and public policy.

But what are the drivers of the American Dream?

Resident perception on how well these drivers are being achieved determines the degree to which their American Dream is being enabled.  All strategic choices made by local elected officials and private sector leaders should be made with the overarching aspiration of better enabling residents to achieve their American Dream.  Comparing resident dimension scores versus a relevant cohort of other locations and/or the national average helps identify both points of positive difference (advantages) and negative differences (disadvantages) to focus on as input for the community strategic planning process.

I have a lot of confidence in the Xavier University research, and am continuing to explore the application of the data in economic development as input to the strategic planning design process.  I think the University has indeed quantified the Dream in a way that is actionable at both the community (MSA) and state level.

Here is what I believe based on my reading and personal contemplation:

I sense lately the need to earn the American Dream has somehow been lost in the discussion about income inequality and the decline of the middle class in America.  It is time we reemphasize that our Nation’s Promise requires individual effort to be realized.  Being an American is about respecting and protecting the right of all residents to earn their American Dream based on their ability and accomplishment.  We need to ensure access to opportunity, but recognize that for any individual the degree of success is commensurate with the effort invested to achieve it.  And, hopefully it goes without saying,  we need to protect those citizens who genuinely lack the physical or mental ability to achieve a reasonable quality of life.

I’d like to know your thoughts on the authenticity of the American Dream.  Do you agree that there appears to be a difference of opinion in the role of individuals versus the government in achieving the American Dream?  Do you feel elected officials are guided by the aspiration of “better enabling residents to achieve their American Dream”?  Should they be?

What You Need To Know About The American Dream

Cincinnati versus Ohio and Nation

To view the complete set of State rankings based on the ADCI and five explanatory sub-indexes, download the complimentary 2012 American Dream State Ranking Report. 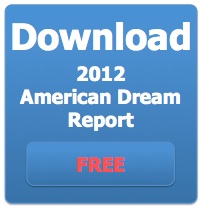 3 Responses to “Op Ed – The American Dream: Who is Accountable?”