What The Economic Development Profession Can Learn From P&G

We’re moving away from the current mass marketing model, away from push and toward pull.  Consumers will only become more demanding.  They want to have a conversation, to dialogue, to participate, to be more in control.

A.G. Lafley speech to the Association of National Advertisers 10-15-2000

I recently attended a conference on Regional Collaboration.  The keynote speaker was Jeff Weedman (CEO of Cintrifuse and VP of Global Business Development at P&G).  Jeff told the story about P&G’s turn around by focusing on the “consumer is boss” paradigm.  He emphasized that in economic development it is also important to define the true “boss” (or beneficiary of the work) and to constantly put that “boss” at the center of all strategic choices.  In doing so, you are able to drive mission clarity, better enable collaborative behavior, and catalyze success.

It was a great talk and I particularly enjoyed it because I lived the story over my 33-year career at P&G.  When I joined the Company, consumer understanding was a clear competitive advantage or the brands P&G sold.  The Company pioneered market research methodologies to better understand consumer needs and the drivers of their purchase decisions.  Consumer insights were the foundation of P&G’s R&D efforts.  The focus drove operational efficiency and effectiveness.

Then the landscape shifted and customers began to exert an increasing influence in the go-to-market strategies that P&G adopted.  In the 1980’s P&G started creating customer teams to better understand the needs of customers and how P&G products could do a better job of meeting those needs.  It introduced a level of complexity into the P&G organizational structure that was new and distracting from the Company’s historical focus on consumers.  In his paper entitled “The Multi-Dimensional and Reconfigurable Organization” . Jay Galbraith describes what he calls P&G’s four-pillar structure (visually described by Figure 1 in the paper).  It isn’t hard to see how the voice of the consumer got lost in the complexity of the global management structure at P&G.  As a Marketing Director, I felt the tension between customer teams who tended to operate on the paradigm the “Customer is boss”, and brand teams who retained the paradigm the “Consumer is boss”.  It should be no surprise the needs of customers for improved margin and the needs of consumers for solutions to their problems weren’t always aligned.

From my perspective, this operational and philosophical conflict between a customer-centric versus consumer-centric paradigm is what A.G. Lafley was to inherit from Durk Jaeger when on June 6, 2000 John Pepper (former Chairman and CEO of P&G) asked him “Are you prepared to accept the CEO job at P&G?”

A.G.’s decision to refocus the entire P&G Organization (including customer teams) on “Consumer is boss” was nothing short of brilliant.  A.G. realized that for P&G to fully achieve its stated promise it was mandatory that the Company reconfirmed “Consumer is boss”.

“Two billion times a day, P&G brands touch the lives of people around the world.  P&G people work to make sure those brands live up to their promise to make everyday life just a little bit better.  P&G – Touching lives, improving life”

What can be learned from the P&G story?

As A.G. said in 2000, consumers “want to have a conversation.  They want to be part of the dialogue, to participate, to be more in control.”  A.G. could have just as easily been describing what the residents of your community want.  With the advent of the internet and social media, the old push model of making strategic decisions with limited (or selective) input from residents is quickly becoming obsolete.  Residents are demanding a greater voice in the process and setting a higher standard of performance for both elected officials and economic development professionals.  Just as P&G concluded, direct engagement with the need beneficiary (in their case the consumer, in the case of the economic development profession the resident) is the new key to sustainable success.

The reapplicable lesson from the P&G experience is that the economic development profession is too focused on a “Business is boss” paradigm.  This is reflected by the profession’s over emphasis on job creation, retention and expansion.  Instead, the profession needs to adopt the paradigm of “Resident is boss”.

Just as P&G decided that the ultimate beneficiaries of the Company’s efforts were consumers, so too should the economic development profession recognize that the end beneficiary of its work is the residents of the communities they serve.

Just like P&G recognized over focusing on one part of the value chain (customers) created complexity and potential conflicts in the strategic decision process, so too should the economic development profession recognize that over focusing on meeting the needs of business can potentially be detrimental to improving the lives of residents.

By adopting the paradigm of the “resident is boss”, the economic development profession can focus on designing and deploying strategies that positively impact the lives of residents.

In the past, one excuse was the lack of a reliable measurement to evaluate performance.  But, now that is no longer the case for states and major MSA’s (and hopefully soon for any community).

Xavier University’s research into the American Dream provides a practical way to move the discussion from theory to reality.  Their American Dream Composite Index™ (ADCI) powered by dunnhumby quantifies the American Dream and defines it in terms of 35 dimensions that can be used to guide local strategic planning.  On an annual basis, performance scores for each of these dimensions (as well as five sub-indexes and the overall ADCI rating) can be measured.  The ADCI score estimates the degree to which residents feel they are achieving their American Dream.  In my opinion, it is an ideal measure for a “Resident is boss” paradigm.

Importantly, the ADCI research documents five areas economic development professionals, community leaders and elected officials need to consider when making strategic choices in order to better enable community residents to achieve their American Dream.  Every choice should be assessed for:

Societal Impact – Resident perception of the extent to which the government, businesses, and people are being fair and trustworthy.

Environmental Impact – The degree to which residents experience pollution in the air, food, water and land.

My Take on an Economic Development Profession Promise

Under a “Resident is boss” paradigm, the promise would be –

How Well Is Your State Enabling The American Dream?

Discover the state that best enables achievement of the American Dream based on a measure of resident’s sentiment. 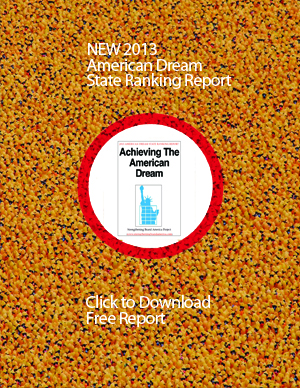