A lot can happen in thirty years

I have long marveled at Robert Zemeckis’ film Back to the Future.

In it, Michael J. Fox’s character Marty McFly experienced intense culture shock when he accidentally traveled 30 years back in time in Dr. Emmett Brown’s (Christopher Lloyd’s) flux capacitor-equipped DeLorean time machine. He intended to set the machine back just 30 minutes so he could prevent Dr. Brown’s fatal shooting by an Iraqi death squad bent on stealing the doctor’s stash of uranium.

The film moves me on many levels, including the deftness with which Zemeckis portrays the 30 year-decline in McFly’s hometown Hill Valley. In 1958, Hill Valley was a bustling place with a tidy courthouse, a majestic theater, retailers filled with customers, and the bevy of service station attendants scampering to fill tanks and wash windshields.

In contrast, Hill Valley in 1988 is characterized by a homeless derelict sleeping it off on a bench, closed storefronts, a neglected town hall, and a well-worn CLOSED sign on the theater. These contrasting images are frighteningly accurate representations of cities and towns throughout the Midwest over the last six decades.

When the economy tanked in 1980, the U.S. found itself locked into extended double-digit interest and unemployment rates. In response, virtually every Midwestern county formed a public-private non-profit economic development corporation to create jobs.

In retrospect, it worked stunningly well. Communities that invested in business parks, infrastructure, incentives, marketing, and prospecting during the darker days were rewarded with more than six years of continuous job growth.

It was a timely and effective solution to a specific challenge thirty years ago, based on analyses from a 1984 U.S. Chamber of Commerce study, “What 100 New Manufacturing Jobs Mean to a Community,” in pre-Internet, pre-digital music downloads, pre-Amazon.com rural Kansas.

Thirty years later, it’s high time to climb back into the souped-up DeLorean, set the year to 2014 and survey the current economic fact: Technology has halved the manufacturing workforce over the past 30 years while producing record outputs year after year. We see no evidence that the decline will be reversed. The headwinds – growing productivity of manufacturing technology, online retailing and overseas competition – are simply too strong to ignore. For many Midwestern cities and town, this reality is damaging not only to employment prospects but to their very identities. 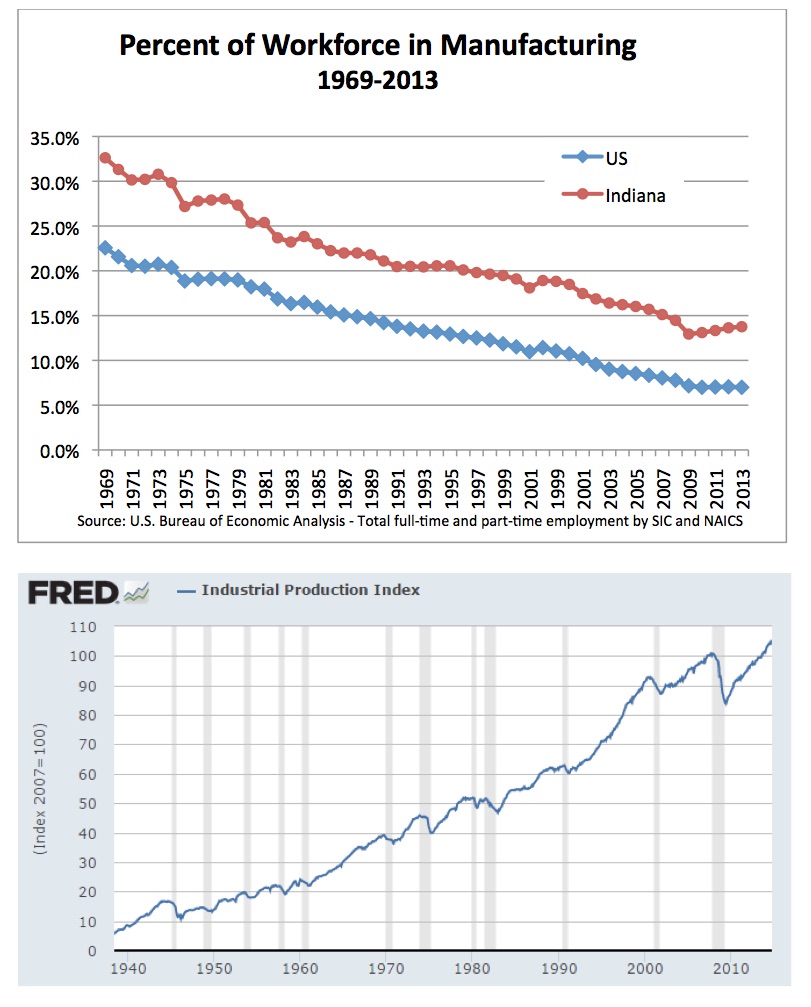 So what is the solution?

Friend and mentor Bob St. Claire counsels me often about the power of simplicity. The simplest truth in economic development today is that better educated and growingly mobile people are choosing first where they want to live and second where they’ll practice their trades.

Today, people with options often choose to live in places other than where they work. In Indiana for example, 70 of the state’s 92 counties export labor to the other 22, importing paycheck income to their hometowns regardless of where they work. Economists like to say “people vote with their feet.” They are right.

It is hard to ignore the success of places like Savannah, Ga., Maryville, Tenn., Fayetteville, N.C., Montgomery County, Oh., and Hamilton County, Ind. in attracting educated, creative and talented people to settle down, shop at local retailers, invest in local schools, contribute to local humanitarian and environmental efforts, and ultimately attract new businesses that are looking for educated, creative and talented employees.

At Ball State University, our research and the research of our colleagues have revealed the secret of these success stories – the single most important element in strengthening local economies is attracting and retaining talented individuals, which requires strategic attention to quality of life issues.

We’ve coined the phenomenon “Primacy of Place” and directed our resources toward researching it, communicating it, and advancing it across the state. In action, it begins with a community’s strategic decision – whether large or small, metropolitan or rural – to dedicate resources to improving life experiences for residents, businesses and visitors. We actively highlight and support Indiana communities that understand:

Beauty and culture matter. Thriving communities often have their own cultural flavor built around historic neighborhoods, green spaces like parks and waterways, and art and performance venues. These assets contribute economic and intrinsic value and improve the reputation and reality of the area.

Downtowns matter. Since the advent of the federal interstate highway system, middle class families have moved from living in central cities to the suburbs. But downtowns today are reemerging as vibrant hubs through the preservation of buildings, support for local entrepreneurs and business owners, and managing a mix of civic, business, cultural and recreational services and amenities. Downtowns are the soul of communities and the most visible evidence of pride in place.

Unlike Dr. Brown and McFly, we can’t choose the time period in which we’d like to work, live, or visit. But we can be sure the future doesn’t look like an isolated central Kansas community in 1984.

Fire up the Delorean, Dr. Brown, and set the dial to 2014. Opportunities abound for leaders who are able to focus on the basic principles of creating great communities.

2 Responses to “A lot can happen in thirty years”