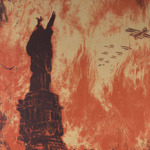 It has taken me awhile to come to grips with writing this post. I want to focus on the impact recent events are having on Brand America’s global equity.

But, I also want to avoid stimulating any political or race related commentary. There are plenty of other venues to express those opinions. Hopefully, this post will stimulate consideration of the implications of current events on Brand America’s equity and a discussion of both the implications and potential damage control actions that could be taken to address the equity erosion.

So, with my fingers crossed, here goes …

There is no doubt in my mind that media coverage of high profile media events in Ferguson and Brooklyn along with the release of the Senate’s CIA torture report have had a major negative impact on Brand America’s global equity.

In previous posts, I have commented how global equity research studies have indicated Brand America’s equity is in decline. These quantitative studies (panned by some readers because the message isn’t positive) clearly indicate all is not well with Brand America’s global competitiveness. Our nation is slipping in the eyes of the world. This is the basis for my advocating a refocus on better enabling residents of our Nation to achieve their American Dream.

Now, Brand America’s global equity has been dealt yet another body blow.

For perspective, in my opinion the best articulation of Brand America’s promise was authored by James Truslow Adams – “The American Dream is that dream of a land in which life should be better and richer and fuller for everyone, with opportunity for each according to ability or achievement.” It is this promise that differentiated American from the rest of the world. This promise is quantitatively measured by Xavier University on a monthly basis. You can learn more about the American Dream by listening to Dr. Greg Smith’s TEDxCincy talk.

But, a brand’s equity is determined more by what a product (or nation in this case) does versus what is claimed about it. And the perceived behaviors of our Nation is impacting Brand America’s equity far more than we may want it to or believe it does.

The issue is not what the media reports.

The issue is that the situations occur in the first place to be reported on. In my humble opinion, it is time to take a hard look at how authentic the American Dream is in our Nation, and to determine actions that will help better enable residents to achieve their American Dream. Net, it is time for us to make walking the talk our top priority.

To illustrate the negative impact our behavior is having on Brand America’s equity, here is a small sample of quotes from the foreign press on the three situations noted above. Note, these are the stories shaping global perception of our Nation.

Love to get your thoughts on what can be done to address the damage to Brand America’s global equity and begin strengthening the authenticity of the American Dream.

If you have found other quotes in the foreign press that you’d like to share, please feel free to add them in your comment. The more perspective we can get, the better we will understand the scope of this growing challenge.