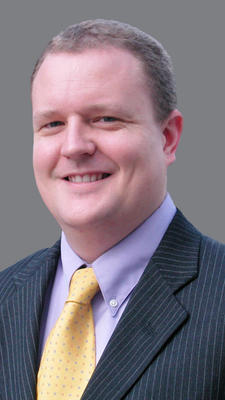 Andrew Duffell is President and CEO of The Research Park at Florida Atlantic University and a DCO 40 Under 40 Rising Star winner.  As background, the Park is an independent special district charged with broadening the economic base of Palm Beach and Broward counties. Th Park’s goal is to create and sustain the ideal environment for innovation and invention, maximizing the academic and entrepreneurial talent and regional resources in South Florida to accelerate economic development and prosperity. is a recognized thought-leader on the strategic role of business recruitment, retention and expansion as a foundation for the Florida economy. Andrew is also a frequent speaker and panelist. His talks include a pragmatic approach to working with start-ups and Fortune 100 companies on market entry strategies.

Innovation and thinking about the possibilities of the future are two things Andrew is great at. Consequently, (in my humble opinion) his insights into the future of the economic development profession are well worth the time to read and reflect upon.

If somebody were interested in becoming an economic development professional, what are the 2 or 3 work skills you would tell are critical to success?

1. Listening skills are paramount: listen to what the companies you are working with want; and listen to what your elected and appointed government leaders want and can accommodate. Once you’ve listened and understood you can find a path to success for all.
2. Patience is important. Everything that involves organizational change: moving a company, growing a company and government policy changes take time.
3. Curiosity and creativity. “What if…” There are many ways to achieve a desired outcome and through curiosity some of those ways can be found; creativity will uncover the others.

Communication and education are key to our profession if it is to be better understood and listened to by policy makers, and by business leaders.

In my direct experience regionalism has not played a big role, unfortunately. I would very much like to see more inter-city and inter-county collaboration on projects and, eventually, in organizations. A challenge as large as water use or traffic can only be comprehensively addressed from a regional perspective. In my region of South Florida we’re facing big issues like beach erosion, salt water intrusion into the water supply, and an aging back-up water reserve as well as increased traffic congestion and need for mass transit. The three counties that make up the region cannot address the issues separately with any hope of success. On these issues progress is being made and I hope that more joint effort is put into the more traditional economic development initiatives such as marketing and recruitment.

What are the similarities and differences you see in the approach to attracting foreign direct investment the same as attracting domestic investment?

Foreign direct investment (FDI) requires substantially different approaches to that of domestic recruitment. Firstly, I am not convinced that recruiting a company from Atlanta to Fort Lauderdale is in the best interests of the economy of the southeastern U.S.: what’s the real addition to the GDP of that region or the U.S.? Zero. What we should want is to grow companies, in terms of their offerings, revenues and, yes, employees so that they can increase their impact to a wider population. FDI is different because if we recruit a company from Sao Paolo to Deerfield Beach we have added something to the GDP of not only Deerfield Beach, but Florida and the U.S. economies, a net positive.

The similarities in approach can be found in the type of companies regions seek: most regions these days have a list of targeted industries they want to bring in. Many of the resources made available to the target firms are the same in that they seek to expedite permitting, find incentive dollars and provide assistance recruiting the right people for the new jobs.

The differences lie in the fact that foreign owned firms often need additional assistance in order to make their transition to the U.S. way of doing business as smooth as possible. The easier the economic developer can make the process, the easier it will be for the foreign owned firm to pick that region.

The other day I drove by the finished building of a project I was involved in many years ago. It’s on a road I don’t often take so I had never actually seen the finished building, and to see it finished and operational, knowing that hundreds of people work there now was a moment that reminded me that what we do matters. If we hadn’t got involved in the project it’s possible the project would have gone ahead but it would have been a lot more expensive and the owner would have had to cut back somewhere.

That project took a long time to come to fruition and took multiple agencies working together to pull it off. I realized working on that project, and was reminded recently, that economic development is very much a team effort.

What are the challenges you believe the economic development profession are going to have to address in the next few years and why?

1. Education. The preK-12 system and higher education need fundamental reform if we are serious about maintaining the U.S.’s lead in innovation, invention and economic growth. South Korea, Singapore, China and some northern European countries, to name a few are making significant strides in how they teach their young people, both academically and on how to compete globally. Without change we will see the U.S. fall quickly in the next 20 years. Children need to learn good learning habits early and they need to know how to think creatively. They must be challenged from an early age to create and use their imaginations. Coding must be brought into the curriculum. More foreign languages must be taught from a much earlier age, and traditional skills like cursive handwriting should be reinstated to create some balance.

2. The profession needs to be heard in Congress more forcefully because the issues economic developers talk about are of existential importance:

3. Another issue economic developers are going to have to address and then communicate about is what the definition of economic development is. Many people, especially politicians, use those two words as a panacea for all our ills. Economic development is a topic that is very broad because in order to be attractive for companies to relocate, expand or start in the community clean water is needed, an excellent education system must be in place and people must want to live there.

Comments Off on Andrew Duffell Interview – DCI 40 Under 40 Winner  |

No Responses to “Andrew Duffell Interview – DCI 40 Under 40 Winner”