Peace For Paris – Role Of Visual Design In Place Branding 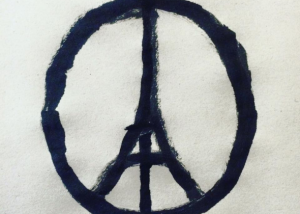 It’s a visual world and people respond to visuals.

It is a simple, but powerful reminder of the terrorist attack on the city of lights. In less than 24-hours the visual went viral. It has become a symbol of world solidarity.

Jean actually created the image as a reaction to the carnage. He combined two iconic images (the Eiffel Tower and the peace symbol) to deliver a profound message. According to Jean – “It’s a message of peace and solidarity. I didn’t do it to benefit from it in anyway. It was my way of communicating with the people I know and showing that I was thinking about everyone affected in Paris.”

Peace for Paris will forever be associated with Brand Paris. It is now a powerful visual design element for the Paris brand.

But, it is not the only example of a memorable place brand visual. In 1977, graphic designer Milton Glaser created the now famous “I Love New York” visual. He even modified the design following the 9/11 attack on NYC to read “I Love New York More Than Ever” adding a black spot on the heart to symbolize the World Trade Center site.

Another great example is the I Amsterdam symbol. It was developed by Kessels Kramer in 2004 and adopted by Amsterdam Partners as the new brand visual for the city. The I Amsterdam visual represents the pride and confidence of the Amsterdammer in their city.

It must be authentic. The best place brand visuals speak to residents as well as visitors. Often the design inspiration is based on insights into the history and culture of the place. Paul Rand, one of the world’s best corporate logo designers, claims a visual derives meaning from the quality of the thing it symbolizes, not the other way around.

It must be simple. The brand visual has to be easily recognizable and associated with the place. You shouldn’t ever mistake it for another location. In the above examples, the Eiffel Tower is iconic Paris, and the other two include the location’s name in the design.

It must be timeless. The brand visual should not contain elements that can easily become dated. While the Peace for Paris visual is closely associated with the 11/13/15 terrorist attacks on the city (and will likely carry that association for awhile), it can stand alone to represent a city and people striving for world peace.

It must be versatile. The visual design will find use in a number of media and it needs to flexible enough to work.  But, it is also important that use of the design be consistent. This is typically achieved through the development of a set of comprehensive rules to guide use (brand guidelines) ranging from placement to color palette. Guy Kawasaki (former Chief Evangelist of Apple and now Chief Evangelist of Canva) views this consistency as one of the keys to successful visual branding in social media.

Does Your Place Brand Visual Stack-Up?

For most locations the simple answer is a resounding no. Many places use a coat of arms as their brand visual. While the design is rich in historical meaning, it has been a few centuries since heraldic images served as an effective communication tool.

And then some place brand visuals are just strange.

Or the abandoned Florida brand visual.

Or the Wisconsin brand visual.

Does your place brand visual deliver on the elements of a great brand visual, or is it just strange?

If you have an example of either the best or strangest place brand visual you’ve seen. Please share in the comment section and provide a link to the image so others can learn from your observation.