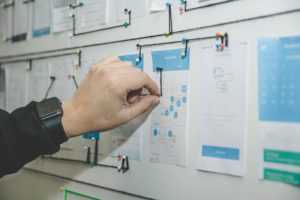 Photo by Alvaro Reyes on Unsplash

For many Brand Managers, this is the time when Management wants to review your Marketing Plan for the upcoming year and make a decision on your brand budget.

Writing a Marketing Plan is a complex and often daunting task for Brand Managers.  So much analysis, insight development and forecasting is involved.  Marketing plans are 80% data driven and 20% inspiration.  The last thing you want after investing so much effort on the front end is to write a Marketing Plan open to criticism because it is flawed by logic errors.

This post is intended to describe the typical, but avoidable, logic traps often seen in Marketing Plans.

Rationalization is about accepting false reasoning because it supports a desired conclusion. A good example is failure to qualify that an assertion you are making is based on an analysis of a narrow sub-population where the finding is statistically significant, but lacks significance for the broader population.  Another example is basing a recommendation on the observation that the competition is doing it therefore you should.  The correction is to determine if the facts correspond to the rationalization.  Your Market Research team can be very helpful in identifying where your written Plan has either stretched data too far or lacks data to support your recommended action.

Prejudice is a thought process based on precedent rather than current conditions. This can manifest in two ways. The first is when an assumption is made that Management has already made up their mind on an action and data is collected and presented to support their point-of-view.  The second is an over reliance on past actions as justification for current recommendations (this is the way we have always done it, therefore…).  The remedy is to start with a blank sheet and seek a data based justification for every recommended action in your Marketing Plan.  Just because you spent $X in advertising this year, that doesn’t mean spending the same amount next year is a wise choice.   Similarly, if Management pushed back on a strategic recommendation in the past, that is not a justification to not recommend it this year if the data supports the choice.

Emotion is often used to bolster a weak argument.  This is because emotional words are provocative. In order to prevent unwise decisions from being made as a result of emotionally-toned words, you should delete the words from the proposal and evaluate what is left.  A sentence like “If we do not invest comparable to the competition, the brand will lose share.”, suggests there might be reasons for investing at that level.  A factual search for those reasons would probably provide a basis for the recommendation rather than relying on fear as the rationale for Management to agree.

Including data not relevant to the recommendation.  Marketing Plans are often loaded with data tables providing general perspective, but short on data related specifically to recommendations. Marketing Plans are not intended to be documents that share everything.  They are intended to make specific recommendations supported by data intended to help Management make funding decisions.  Sharing both extraneous and “nice to know, but not needed to know” data actually make the decision harder.  Every recommended action in a Marketing Plan should have 1 – 3 basis points for why it is a right choice.  If you need more data to justify the choice, it is most likely a weak choice.

Misuse of analogy can be a problem.  Analogies can be helpful instructional tools, but when used as a reason for an action they can be highly misleading.  An example is using the fact that the Internet has disrupted advertising in many categories as a basis for investing in an interactive media strategy.  I have seen arguments in Marketing Plans that it is actually improper to hold interactive media investment to the same P&L impact as traditional media because it is such a disruptive communication channel.  The fact that the Internet has a specific impact on a business category does not mean it will have a similar impact on the category within which your brand competes.  The fact that so many people have internet access does not necessarily mean a dramatic increase in spending against an interactive media plan will generate better results than investing in a traditional media plan.  It is said nothing can be proved by analogy. Instead, support your recommendations by direct observation and reporting of cause and effect. This is where having a robust tactical testing and scale-up plan makes sense.

Generalization that exceeds the facts becomes false and leads to errors of judgment. This is often a risk when using test market results to justify national expansion.  Many times, promotional levels invested in test markets far exceed the levels allocated for national roll-out.  Similarly, competitive reaction to test market initiatives is rarely indicative of what will occur on a national level.  You also see this logic error when quoting market research results.  Most market research is conducted within a specifically defined target audience.  Extrapolating the results beyond this audience is outside of the study findings and represents an unacceptable generalization.  You fix this error by being precise and transparent about the decision risk associated with any recommendation.  Management is comfortable with taking risky decisions.  The Marketing Plan should help Management identify where the risk lies and the degree of the risk.

Of course there are more than six logic errors that can be found in Marketing Plans.  However, the above represent my pet peeves from years of commenting on Plans.

I find these errors are made most often when the Brand Manager is unsure of the recommendation being made.  Rather than spending the time to get data that would increase certainty (up against a deadline to submit the Plan), the written justification often becomes a slight of hand.

I am a big believer that every Marketing Plan should overtly disclose decision risks to Management. I also think the Brand Manager should have a plan for how to minimize the negative impact of a bad decision. For example, if the decision is to triple interactive media investment:

Presenting a complete picture not only makes good business sense, it also exhibits leadership maturity.  Brand Managers require courage to call Management attention to areas of the Plan lacking solid support.  However, robust discussions on those elements often lead to a stronger and more successful Plan. Brand Managers need to embrace the fact Management has experience that can be helpful and including their thinking will actually reduce the risk of any Plan.

Don’t forget the Content and discover how Paraphrasing Tool Works?
In paraphrase, the meaning and ideas of the source material has to be maintained – by using your own words to express someone else’s messages or ideas. To effective reword a text you should use as few words as possible from the source content. seotoolscentre has a paraphrasing tool will help you achieve that and rewrite any text in seconds, therefore avoiding plagiarism issues. Paraphrase Online is free app that can be used for automatic dynamic text processing. Special algorithm enables the synonymization of words, detection and exchange of inflectional forms, as well as rewording of phrases, expressions and even the whole sentences. It converts the inserted text, but preserves its meaning, generating the most accurate synonyms. The principle of the application is very simple and similar to many popular translators available on the Internet. After filling “Text before” field, just press the “Paraphrase!” button and your new content is ready.

One Response to “Six Common Logic Mistakes In Marketing Plans”